"You already know that the story is very funny the 300 times you listen to it, Damian."
- Addison speaking with Damian (Chapter 3, Book 1)

Addison Woods is one of the main characters in Zoophobia. He is a failed government experiment of creating human and animal fusion.

Addison is a relatively short albino teenager with shoulder-length blonde hair. His eyes are light green and his sclera is white. He wears a green sweater and dark green pants. He also has green, striped fingerless gloves and a scarf. He has a long, blonde tail due to being a failed experiment.

He likes to be alone and spends most of his time working at the Art Wing of Zoo Phoenix Academy. He does not open up to others often and sometimes hides an air of elitism. His best friends are Damian and Sahara. He is your typical introvert. 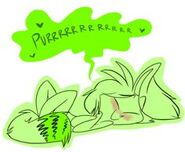 An old art by Vivziepop. 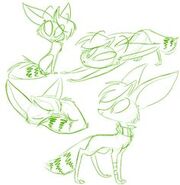 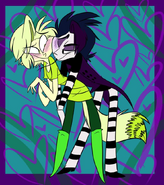 Addison and Gunter, original version of Gustav.
Add a photo to this gallery

Retrieved from "https://zoophobia.fandom.com/wiki/Addison?oldid=8157"
Community content is available under CC-BY-SA unless otherwise noted.