Bozzwick is a demonic teenager. He is an avian, meaning he can shapeshift into a bleeding heart pidgeon. Easily bored and blunt, he can also be very perverse, often causing awkward situations or toying with people’s emotional states.

Matching collar/necklace around the neck along with a set of headphones. He has red plaid boots and red pants to match, and a jumper. When he unfastens his jumper it shows his constantly bleeding chest and bandage around it. 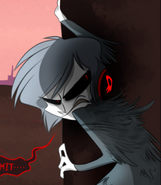 HE'S SO FLUFFY
Add a photo to this gallery

Retrieved from "https://zoophobia.fandom.com/wiki/Bozzwick?oldid=7996"
Community content is available under CC-BY-SA unless otherwise noted.