Camilla is known around ZPA as a "bad girl" of sorts and is actually the deer spirit of love and heart. However, she loves and lives to dance, and is very skilled at it as she tries to explore every form of dance. She works as a pole dancer, leads a girl gang with her two best friends, is close to her "Cousin" Autumn, adores all things burlesque, and was held back at ZPA for her lack of academic drive. She hates her bad rep with her gang and that everyone thinks she's "easy" to sleep with, and is actually a hopeless romantic under her tough shell.

Camilla and Kaycey as Alice and the Cheshire cat

Camilla, Ruben , and other characters 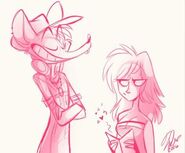 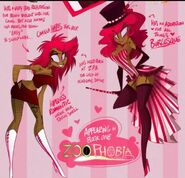 Retrieved from "https://zoophobia.fandom.com/wiki/Camilla?oldid=7898"
Community content is available under CC-BY-SA unless otherwise noted.