The Prince of Hell & a student at the Zoo Phoenix Academy

Levitation
Transform into a beast of hell

Damian is a major character in Zoophobia.

Damian is a 16 year old Anti-Christ, though he isn't as evil as his parents would like him to be, and is very laid back, always jumping at the chance to explore the overworld (Safe Haven), in his frequent efforts to indulge in a temporary escape from the depths of Hell. This is largely due to the restrictions placed on him by his father, the Devil, which kept him confined to his parents' castle in the underworld throughout the majority of his childhood. He has a crush on Kayla, despite the fact that she is in a relationship with Zill, and she runs away during every one of his attempted flirtatious encounters with her. Damian's closest friends are Addison and Sahara. Though Damian's parents cared for him deeply and nurtured him throughout his childhood, Damian was placed under the watchful eyes of both Tentadora and Major Styx from a very young age to ensure that he was kept out of trouble. He is often seen accompanying his cousin Jack during his time spent on the Zoo-Phoenix Academy's school grounds. He flirts with Addison, and is shown to be very clingy and protective of him, even going as far as becoming very openly jealous when Addison asks Gustav out only a short while after the two had met.

Despite having a crush on one member and another member being his cousin, Damian is not close to the Main Five and often ruins the end of their musical performances by setting their piano on fire, Damian is also jealous of their talent and even if they accomplish something with great skill, Damian will still claim their performance was terrible such as when he gave Zill and Jack a score of -0 after they won a dodge ball game. 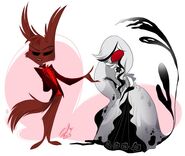 Retrieved from "https://zoophobia.fandom.com/wiki/Damian?oldid=9447"
Community content is available under CC-BY-SA unless otherwise noted.