The werewolf who knows how to party.

JayJay BluJay Burdell, also known as Jiji. She is the farmer of her own farm, and she loves to hang out with her allies, which includes Ke$ha. She is the queen of all of the wolves in the clan. When the night came, JayJay was in conversion of the queen's animal-self. She had animalized JayJay, and she became one of the monstery wolves. A few weeks later, JayJay became a celebrater along with the werewolves the queen have earned the lucky feathers for the gift JayJay and the wolves are the celebraters of safe haven and they're still them during the sunlight for these transforms.

Jayjay's Love Intrest is Raven. She is attracted to both genders and is Bi 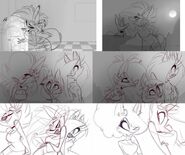 "Let's make the most of the night like we're gonna DIE YOUNG!" while singing in the cavern.

"Yo rich boy where's the rest of the alcohol at?" when she's holding the phone while questioning the person.

"AHH! Thank you winnie you da BITCH!" when Winnie gifts Jayjay the bottle.

"Stop pretending you own me trust me you don't anymore." while Jayjay negatified the Vivziepop's fans by the middle finger.

"This place is pretty dead." while bored on her date.

"Officer it's not my fault! The paperazzies were bothering my house i'm not goin' drunk!" while talking to the Fantasy Police.

"I promise i'll always be there for you." while reassuring Zakury Fantailian

Retrieved from "https://zoophobia.fandom.com/wiki/JayJay?oldid=8571"
Community content is available under CC-BY-SA unless otherwise noted.