Can shapeshift her limbs into various weapons

Jillian is a childhood friend of Jack.

Jill Is a dark purple cat demon with corn blue eyes and magenta pupils. She has darker stripes on her arms, legs, and back, a soft purple chest and underbelly and wears a black choker with a red amulet.

Jillian saved Jack from demon when they were younger.

Drake is Jillian's boyfriend and a fellow royal guard. 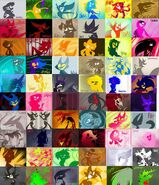 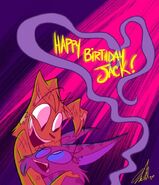