Start a Wiki
"Kayla is a girl of many talents. As a star performer, the class president and an extremely social and responsible student at ZPA, her passions shine through her dedication to education. While Kayla is often soft-spoken and patient, push her too far and you will be in for a rather unpleasant surprise. Zill is often reminded of this the hard way." -from the Zoophobia characters page.

Kayla is an anthropomorphic kangaroo attending the Zoo Phoenix Academy located in Safe Haven. She is one of the top students alongside Zill, and the two of them also have a reputation for being the school's power couple. During their long relationship that had lasted three years, she is very strong but can be very emotional over the ones she loves. She also hangs out with Jackson Wells, Vanexa, and Spam but seems to get along with many other students. 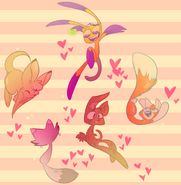 The Original Five with Hearts 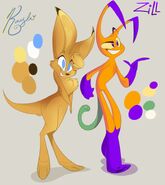 Retrieved from "https://zoophobia.fandom.com/wiki/Kayla?oldid=8518"
Community content is available under CC-BY-SA unless otherwise noted.