Lucifer is the ruler of Hell.

He is shown to be stern but because he cares for his family and makes sure to protect them. When he found out Damian was going to the surface, he was furious because he could have been killed there.

Later, he lets Damian continue going because it might be a good thing for Damian's well-being. In Son of 666, he tries to get Damian to focus on being evil rather than play his banjo and even destroys it making Damian upset. Later he tries offering a violin to make up for the banjo but Damian breaks it out of anger. Lucifer laughs and smiles proving he does love Damian and just wants the best for him. 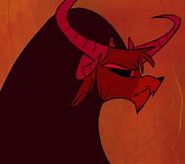 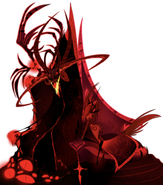